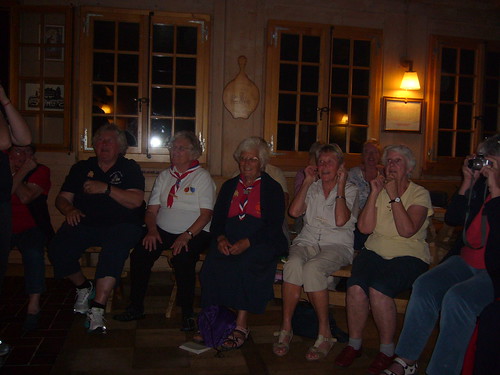 Swiss night and the cheating continued! It turned out this was to be a somewhat reoccurring theme of this trip!

First though we learnt a song in original Swiss German – no mean feat!
To continue our musical journey we welcomed the alpine horn player with his enormous alpine horn. Clearly a talented man- as was proved when the Our Chalet staff tried blowing the horn!! Needless to say we were all very impressed (with him, not them!)!

A real highlight of the evening was the enactment of the Legend of William Tell as performed by the ISGF!  Marion Harris took the starring role but the piece also featured excellent narration by Diane Haigh, a fierce Officer played by Joan Hughes and a hysterical teenage performance from June Clark.

Then to the second highlight of the evening – the Swiss version of Jeopardy! Did you know that the Swiss consume on average 70 million Kilos of chocolate as a nation each year!? Neither did I it turned out but all the questions my team (the cuckoos) did know, we were rudely disqualified from answering either because we answered too soon, or, possibly because the other teams (como and ole!) were put off by our fierce battle cry. I mean everyone knows that Switzerland’s main export is water, right? It turns out we didn’t, but that is beside the point.

After yet further blatant cheating by the other two teams we were all rewarded with some yummy chocolate fondue!
Did you know the word “fondue” means ‘melted’? We did, but we weren’t allowed to answer the question… not that I’m bitter about it…