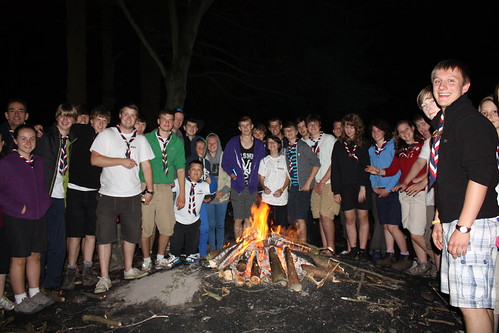 7th Dronfield Explorers arrived on Saturday and  let everyone on camp know – the first thing unpacked was a huge flag pole complete with a Union Jack Flag. The younger leaders also planned a camp fire in the evening and invited the other groups on site to join them. The fire was built and songs exchanged in different languages between the scouts. A great start to the week guys!

Sunday morning, the Explorers awoke to find their flag missing and a Flemish note in its place. After a quick google translation they discovered a Belgium group had stolen their flag in the night (apparently local custom if you leave your flag up) and that they were now involved in a giant capture the flag game. As yet they haven’t managed to be sneaky enough to get their own flag back but have managed to get the Belgians’ flag.

After a late breakfast the group travelled in to Leuven for a tour of the scout museum followed by a picnic lunch. In the afternoon we toured through Leuven on our way to the sports centre where the group took in turns to try their hand at indoor rock climbing and Ultimate Frisbee. The day was completed by a BBQ back at camp and a wide game in the evening.

Today was just as action packed; The explorers toured the camp site on mountain bikes and came back caked in mud. They also did an excellent job with some environmental work on the camp site which included clearing the drainage systems from mud that the previous months of rain had washed in.

Oh and the Swiss sunshine has spread its way over to Belgium, we’ve had two very sunny days =)