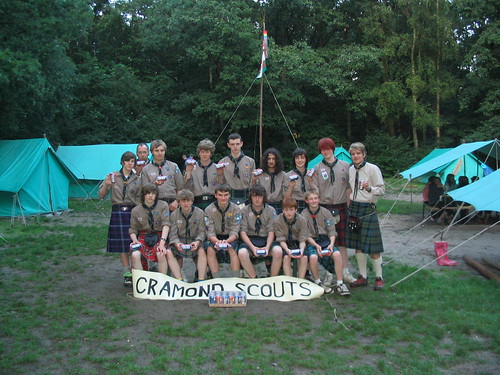 Since the last update Matrix Explorers and 1st Hermitage Scouts have departed De Kluis, despite all of them wishing they were staying on for another week!

This week is a busy week on site as we have three groups. They are Crammond Explorers, from Scotland; 1st Easingwold Guides, from Yorkshire; and Whittlesey Explorers, from Fenlands. All three groups went into Leuven on Sunday to get their bearings and explore the area a little. Crammond Explorers and Whittlesey Explorers both visited the Scout and Guide Museum, while the Guides went bowling, followed by climbing and tunneling and even had time to fit in a trip to one of the Italian restaurants before returning back to camp.

Once everyone was back at camp there was a campfire in full swing, with a good number of songs that I’d not heard before, and many that I had. The selection ranged from funny ‘repeat after me’ songs to traditional Irish songs!

Yesterday Easingwold Guides had a chilled out morning before heading out on the Hike to go Canoeing which they all enjoyed, even though we were all soaked before even getting in the boats due to the rain.

Also on site for the morning were Crammond Explorers who did a bit of pioneering in which they created two swings and a table after an inspection. In the afternoon they enjoyed hanging around in the tree tops while they were on the High Ropes Course, with one of the Explorers finding the resonance point of a telegraph pole whilst stood on top of it!

Whittlesey Explorers went into Brussels to sample the delights of Belgium’s version of the Eiffel Tower, The Atonium; and to have some fun on the slides in the Oceade water park. They enjoyed it so much that they were late back for their evening meal.

Last night saw a real treat provided by Crammond Explorers who introduced us to the ‘Delights of Scotland’ with a Scottish Theme night. This was started off with Welly Tossing, followed by the Caber Toss (in which the points are awarded for how close the caber is to 12 o’clock, not how far it’s thrown), Tug O’ War and a Three Legged Race. Needless to say the Scots won at their own games, but everybody enjoyed themselves. Following the Games we were treated to some Scottish produce which included Irn Bru, Haggis, Neaps, Tatties, Cranachan, Super Jam, Haggis and Pepper Crisps, Shortbread and a variety of Tunnocks Produce; all of which was donated to the group from various suppliers. Amongst all this festivity there was often a round of Happy Birthday as it was one of the Crammond Explorers Birthdays and one of the Whittlesey Explorers Birthdays too.

The rest of the week looks to be a good one!