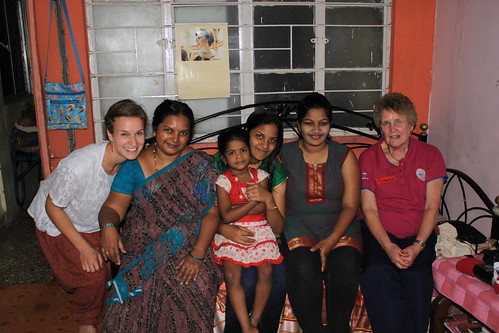 How time flies! Our stay at Sangam is coming to an end, and we have just had the closing ceremony to mark it. I’ll take you back through the past few days since my last post. We have visited a number of community partners whom Sangam works closely with, including Tara Mobile Creche, Deep Griha sights which run medical and educational programmes, and Maher which is a centre for women and children. It has been both humbling and inspiring to visit these centres where volunteers and local staff are making such a huge impact on the lives of the communities.

On Saturday we organised a fun day for 60 children from 2 of the centres. The UK groups ran crafts, parachute games, cricket and other outdoor games, sang songs and played pass the parcel with the children, which all went down very well. My highlight was dancing the conga round the garden with a string of giggling children following behind me. It was also a great way to celebrate my birthday! Following Indian tradition, I had to cut the first slice of birthday cake, and Mina, a Sangam member of staff, then preceded to feed me the piece of cake! Certainly a birthday I’ll never forget!

We have also enjoyed a performance on the life of Gandhi by a group of children from Maher, which was very well done. They are performing in Glasgow next summer, so if you happen to be up there, do go and see the show! On Sunday we visited the Aga Khan Palace in Pune, which houses a memorial on Gandhi, and it was where Gandhi, his wife and secretary were imprisoned between 1942 and 1944. We also stopped at Alandi which features a picture postcard scene with women in their saris washing along the banks of the river, and the oldest temple in India which was magnificent.

Yesterday we gathered photos from the week, learnt the art of Indian embroidery, Warli tribal art and enjoyed a good old sing song at the campfire last night. There’s just time to learn how to tie our saris this afternoon before a traditional Maharastra (the region Pune is in) dinner this evening. Tomorrow morning we will head up to Delhi and on to Agra where our adventures continue… Still no elephants so I’ve got my fingers crossed for the next couple of days!