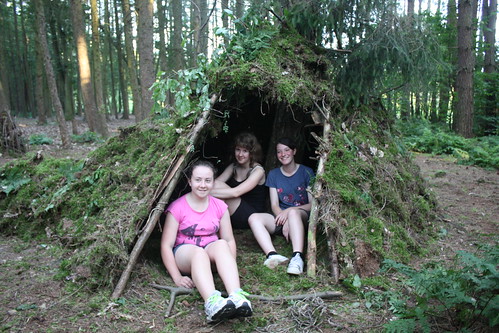 Yesterday the explorers braved the heights of the high ropes course, after being severely encourages to join in I eventually braved it as well (NEVER AGAIN!).  The kids however had great fun clambering, wobbling and zip wiring around. The activity lasted all day with the group split between two sessions. The opposite activity was shelter building. Some very impressive shelters were built by all the explorers, however the girls wiped the floor with their ‘Hilton Hotel’ of a shelter. Well done Girls!!.  Almost all the Explorer Scouts slept in their shelters even one of the leaders  braved the true out doors, albeit in a comfy hammock!

It is two of the explorers birthday today, Jack and Joe who have turned 15.  The boys spent the morning canoeing with the rest of the group. (Not a bad way to spend it) Canoeing has been the most eventful activity by far, with at least two capsized boats and tons of the kids ‘falling in’ and going for a swim. Well who can blame them it’s been 32 degrees here.  The afternoon was spent geocaching, which involved using GPS systems to navigate their way to certain places and then find different objects. Split into teams there seem to be a fair bit of rivalry over who would complete the course.

The birthday festivities are going to be finished off with another BBQ, complete with balloons and banners. Once again Happy Birthday Boys!!