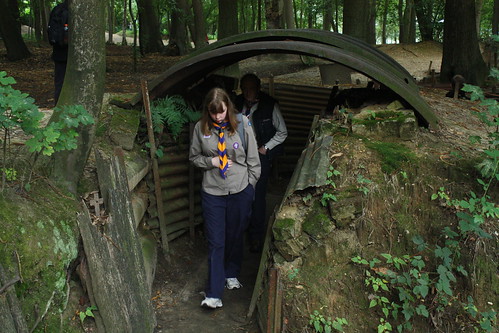 Sunday was my first full day with the 9th Airdale Scouts and Explorers. The group had a relaxed morning on camp doing various craft activities such as carving wooden woggles. After a quick lunch on-site we set off to Leuven to visit the scout museum (Second time for me, I will be a regular customer by the end of summer) the scouts seemed to really enjoy the museums and spent awhile choosing badges to buy and add to their own collections. After a short look in the museum we moved on to Leuven local bowling alley. The scouts were first to have a game. It was very amusing to watch them try to pick up the heaviest bowling balls possible. The Explorers seemed to be a little more coordinated in their bowling abilities, and needless to say their scores were a little higher.

The main activity on Monday was the high ropes, and rather than me being persuaded to go up I was persuading some of the younger scouts to brave their own fears on the zip wire.  The afternoon was spent on an ‘incident hike’ in which the scouts hiked round in groups to different bases, where they were met by a task to complete before they could move on.

Today the Scouts spent the day at Zoet Water, making the most of the crazy golf and trampolines. The older Explorers and myself visited a number of sites related to the 1st World War. Our first stop was the Flanders Field Museum and Menin Gate which was very moving. Our next stops were the Tyne Cot Cemetary, one of the largest allied forces cemeteries in Europe and the Langmark German forces cemetery. The contrast between the two is very prominent and really made the explorers think. Our final stop was a second museum which had preserved the trenches from the war. The explorers had a lot of fun crawling through muddy tunnels, although I’m sure they were a lot less muddy than back in 1914!