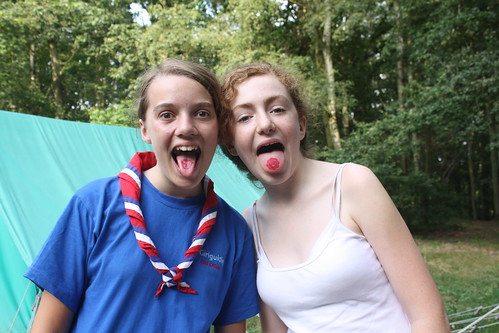 So almost half way through my second to last week, and already the groups have done so much!

Olton Guides had a lazy Sunday morning after a very early start on Saturday morning  to get the coach (you could say it was simply a late(ish) Friday night!) The afternoon started with tree climbing, most of the girls climbed all three trees, right to the top (better than the scouts some might say?) Tree climbing was followed by BMXing in which two of the girls stayed for an extra route and came back thoroughly exhausted but very happy!

Monday the guides set off around nine to head into Leuven for a some Caving at a climbing centre. I hear from the leaders that a the start they had five girls refusing to go into a pitch black wooden hole and by the end they were all smiling and discussing how many bumps on the wall there had been and which was the tightest space to get through. They rounded off the day in Leuven with a meal out before returning to camp exhausted.

They spent today onsite completing both adventure ropes courses, which I think they could have done over a million times and still not got bored, (I hope you appreciate the photos, it was terrifying trying to get them!) This evening they had a lovely relaxed marshmallow toasting session around the campfire before an early start for Brussels tomorrow. However I think the highlight of the day for the girls was the ‘tongue tattoos’ they bought in the supermarket. (Don’t worry parents, its just edible paper that leaves a transfer on them!)

1st Eynsford and Farningham along with 6th Swanley Scouts started their Sunday with a visit to the scout museum followed by splashing around at the swimming pool in Leuven. The swimming pool was a great hit and they are returning on Friday when the guides have also planned to go. It was an early start for them this morning as they all piled onto a coach bound for Ypres, They visited the Tyne Cot cemetery and the In Flanders Field museum followed by dinner out and finally laying a wreath at Menin Gate for the Last Post  Ceremony. It’s been a long day for them and they are only just arriving back. The hike and canoe will really knacker them tomorrow!