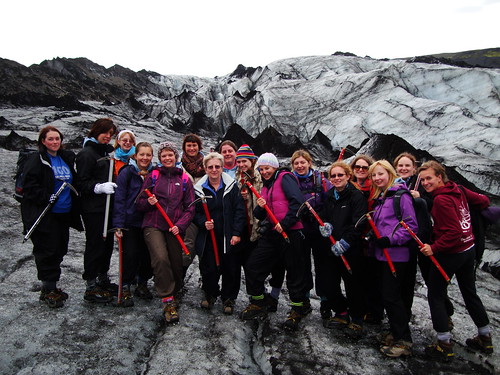 After getting kitted out with crampons and ice axes, we set off to explore the Sólheimajökull glacier with our guide Marie who took us round the water cauldrons and across blue and white ice. The glacier was covered in ash from the Eyjafjallajökull volcano eruptions last year, so it looked like the surface of the moon, with mounds and craters all over. Some of us tried the glacier water which was naturally nicely chilled and good enough to bottle.

We spent Friday in Reykjavik doing the sights, including the National Museum and its infamous drinking horn collection, the Maritime Museum, Saga Museum, and Hallgrimskirkja and its church tower with panoramic views over the city and out over the harbour. There was also time for souvenir shopping and the best fish and chips I’ve ever tasted! We returned to Reykjavik on Saturday and took a boat trip to go whale watching. It was a beautiful day with calm seas and blue skies. First we went to puffin island where we saw loads of them flying around and sitting on the rocks. Then we headed out to the bay where we were fortunate enough to see lots of active Minke whales which was amazing! We stayed in Reykjavik for the afternoon and watched the Gay Pride parade in the sunshine, and enjoyed a Viking burger for dinner, served by genuine Vikings!

Yesterday was white water rafting day – great fun going down the rapids, playing silly games and jumping off cliffs. We all ended up in the water at least 3 times, whether deliberately or otherwise! There were some big rapids but other sections of the river were through a canyon which was calmer and a few of the group opted to float down the rapids beside the boat.

This afternoon we’re off to explore the Icelandic countryside on horseback, it’s non-stop adventure here!