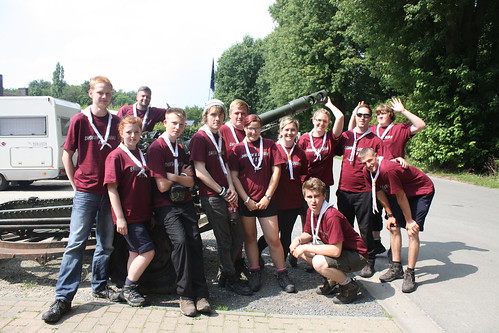 So it’s been a while since my last post, and  four very exciting days for both groups

Shogun and Legend have done everything possible this week in Belgium. Tuesday was spent testing fears on the high ropes course, which consists of a fair bit of team work for one of the sections, the guys worked really well together.  In the afternoon we hopped on bikes and took off on the Mountain bike trail through the Meerdaal Forest, they are as hard as 9th Airdale claimed them to be. I know what you mean about the sandy trails being REALLY difficult now!

Another active day followed with 13 still knackered explorers and leaders heading off for the hike and canoe on Wednesday. We didn’t quite have the heat and sunshine as when Dronfield went canoeing so talk on the hike up consisted of  ‘I don’t plan on going in’ and ‘I’ve not even brought a towel, I won’t need one’. Four hours and two capsizes later, three soggy explorers sat on the path wondering on the best way to keep their feet dry in their now sodden shoes. James had the best idea; dry socked feet  in now empty sandwich bags placed in soaked hiking boots.

Thursday was a very commemorative and thought provoking day for the Explorers. After following a similar schedule to 9th Airdale last week, visiting the In Flanders Field Museum, Tyne Cot Cemetery and Sanctuary Wood Hill 62. We returned to Ypres for a Dinner and then rounded off the day by laying a wreath during the Last Post Ceremony at the Menin Gate.

Today was spent in Brussels where the group had a look around the city after trying  their hand chocolate making at Planete Chocolate, they arrived back on site with armfuls of chocolate. Have a look at their photos below!

The Langely Green scouts also made a visit to Brussels and the chocolate factory but at the start of the week. They also had a great time at the Walibi theme park yesterday. This afternoon they set off on the hike and canoe, no capsizes for them, they all climbed out at the end still dry.