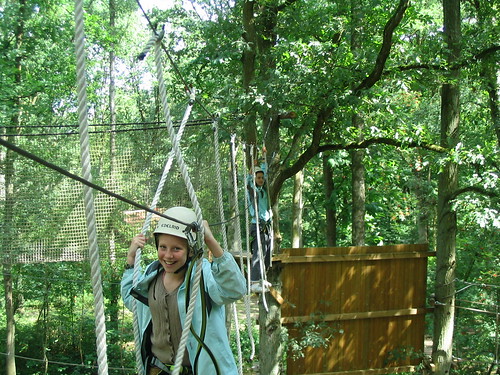 Well it’s nearly the end of yet another action packed week of fun, the time seems to have flown by!

With three groups on site it’s been a bit of a challenge trying to keep up with everyone, but I’ve managed so far!

Since the last post at the start of the week, Easingwold Guides have been on the Adventure Ropes course (where there were a few screams let out!), had a go at BMXing around the forest, had a shopping trip to Leuven and a day trip to Brussels and are off in Bruge today to visit the chocolate factory and quite possibly some proper Belgian waffles!

Whittlesey Explorers have also been to Bruge and visited the chocolate factory, visited the Stella Artois Brewery, tried their hand at orienteering and pioneering (in which they built a volleyball court with an umpire’s chair!) and are currently off in Brussels to see the sights. Tonight on their way back I’m meeting up with a few of them to visit a Belgian music festival in Leuven which should be fun.

Walibi was the choice of destination for Cramond Explorers on Tuesday followed by mountain biking on Wednesday and more excitement followed in the form of a trip to Oceade water park in Brussels on Thursday combined with some retail therapy!