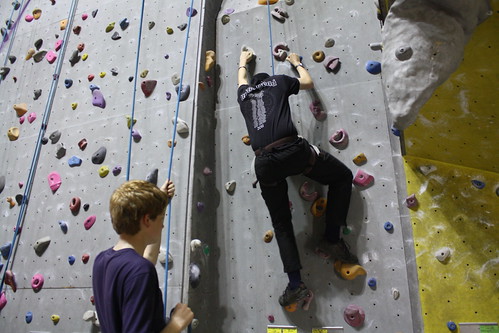 Already half way through my last week, the summer has gone ridiculously fast. the two new groups Yeovil District Explorer Scouts and Titan Explorer Scout Unit from West London arrived Saturday, although the holiday journey for Yeovil started on Friday evening. The Yeovil explorers travelled up to London to stay overnight in Titans’ scout hall. After a pizza dinner, lots of films and barely any sleep they boarded the coach early Saturday morning bound for De Kluis.

Saturday afternoon was spent exploring the campsite and enjoying the sunshine that finally arrived. On Sunday the Yeovil Explorers visited Leuven for the day, which on a very rainy day despite a street fair is pretty dreary. A trip to the Mcdonalds and then up to the bowling alley lightened the mood.  Titan spent the day mountain biking, an easy route in the morning for one group and a slightly more difficult route for a second group in the afternoon. Despite the rain and being soaked through they had a really good day.

Monday was a scorching hot day, perfect for Yeovil’s hike and canoe,which like most weeks ending up in somebody going for a swim. Titan visited the Hungaria climbing centre trying their hand at a number of activities.  First up was Klettersteiging. Which originates from the mountains where climbers scale the rock face on ladders and metal prongs or footholds. At Hungaria the sport has been adapted to scale their extremely high walls  and has other element added in such as walking across very wobbly beams. The group them moved on to climbing before a very welcome break for lunch, you can see in the photos  some very exhausted explorers. Next up was the minibenji which involved being roped in as though you were rock climbing. They then climbing a very long ladder up to a platform from which they jumped, there was a moment of free falling before the ropes caught them and they where lowered safely to solid ground. The final activity was the caving in which is probably not designed for large explorers but they managed to wiggle their way through the mass of tunnels and tight turns.

Yesterday Titan attempted the adventure ropes course in the morning then visited Leuven for a little shopping in the afternoon. I think the girls spent the entire afternoon in Zara. Who can blame them?? I spent the day with the guys from Yeovil, on the Battlefield tour. The group learnt a lot from both the museums and where very moved by Tyne Cot Cemetery.  At the Last Post Ceremony back in Ypers at the Menin Gate Brad made a reading before the group layed their wreath to commemorate those lost in the war.

Today Titan have gone off to Brussels for the day, intending to get the open top bus tour over to the Atomium and combine this with a visit to Mini Europe. Yeovil have taken the mountain bike out for the morning and are returning to camp for the adventure ropes course in the afternoon.

The sun is still shining, hopefully the last week of the season will be sunshine from here out, fingers crossed!