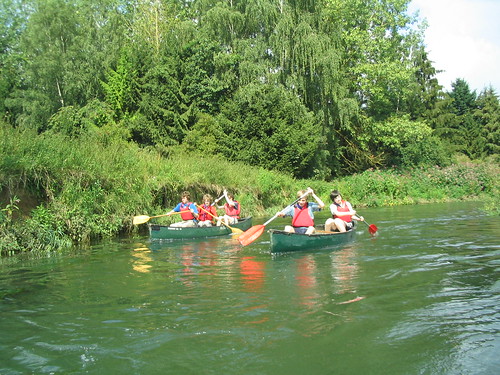 On Saturday afternoon I said my goodbyes to 2nd Bangor Scouts and 1st Cupar Scouts who had all enjoyed their week here at De Kluis, but were ready to head home for some much needed rest. They were both good groups to have for the first week and they were already talking about meeting up together next year for their summer camps, with both groups trading neckers and badges already!

The New arrivals are Holywood Guides and St Eugene’s Scouts, both from Ireland.

Saturday evening saw them sat around a small fire and settling in to their new home for the week.

Sunday saw an early start for the Holywood guides in order to make breakfast at 8am, whilst the lucky lot from St Eugene’s got a lovely lie in till around 10am!  Once everyone was up and fed both groups merged together for an orienteering competition, boys against the girls with the winning team having the promise of Mark (St Eugene’s Scout Leader) buying them ice creams. I joined the boys team and we whizzed around the site and finished with time for a cup of tea before the girls team returned. In the afternoon both groups headed to Leuven and explored the city before returning for some chill out time and a campfire.

Today I went with St Eugene’s to the Canoeing and what a day for it! The weather seems to have picked up here and it’s a lot sunnier than last week was. The Guides went to Brugge today to visit the chocolate museum as well as the town.