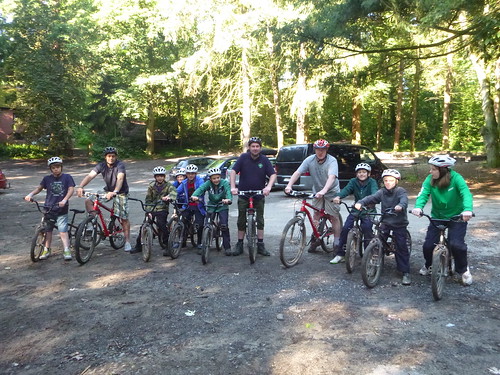 So, I have already said goodbye to the 9th Airdale Scouts and Explorers and welcomed two new groups onto the site, the weeks are flying by! Sorry for such a delay since my last blog, I had a quick trip home over the weekend for a family wedding so haven’t had the chance to post until now. I left 9th Airdale on Thursday evening after they returned from an action packed day at Oceade water park in Brussels. After 4 hours in  the water park they all came back exhausted and what were very loud and excited Scouts in the morning were now half asleep Scouts.

The group spent their last day on the hike and canoe in the safe hands of Joanna, the VA representative who was sent out to replace me for the weekend. I’m sure both 9th Airdale and Joanna had an eventful day on the river.

I arrived back in De Kluis on Sunday to be met by two new groups to the site, ‘Shogun and Legend Explorers’ from London and and 1st Langley Green Scouts from Crawley.

Both groups spent their first full day in Leuven visiting the Scout museum. Langley Green Scouts then visited the Sportoase centre in Leuven for some swimming. Shogun and Legend Explorers spent the afternoon exploring the town which was hosting a food and drink festival. The Explorers enjoyed tastes of the restaurants specialities and the leaders enjoyed some local brewed beer.

Today Shogun and Legend visited Walibi theme park, despite constant showers of rain, they had a great adrenalin filled day. They came back soaked through, I’m not sure if this was from the rain or the water rides.

Langley Green spent this afternoon on the adventure high ropes course and the tree climbing activities. Almost all of them made it to the top of the highest tree climb, despite the rain showers.

At least we’re not having thunderstorms Chris! Lets hope for some more sunshine!